Although I’m not the biggest fan of colder weather (summer girl here!), I do love ONE thing about it – warm drinks! Hot soups, gumbo, hot chocolate, and fires. Give me alllll the warm stuff! 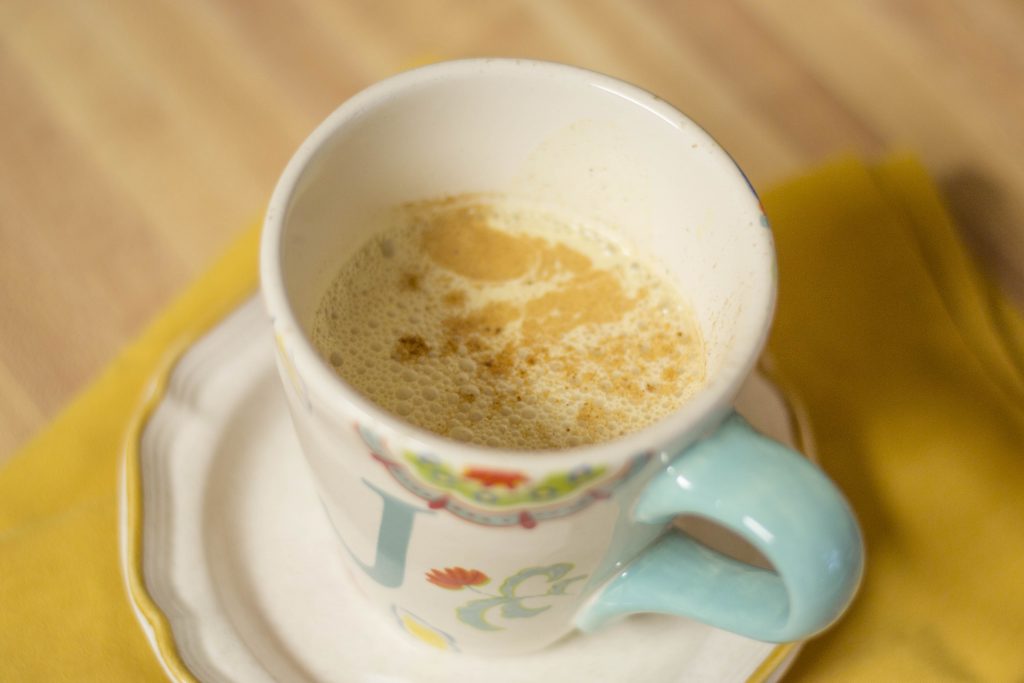 You may or may not have heard of golden milk, or maybe you’ve already tried to make it with a mixture for the freezer. It’s basically a rich, hot drink that contains coconut milk and turmeric (which makes it golden) and a few other additives to your liking.

The freezer version (golden paste) consists of mixing things such as coconut oil, turmeric, and black pepper, and it keeps in the freezer for up to 6 months. Both times we made it, we ended up losing half of it to freezer burn because we didn’t use it up fast enough. It only takes a tiny little chunk each time you make it, and I only drink it a few times per week in the winter mostly. And if you know me, I don’t like to waste!

The way I make it now is so quick and easy. Recipe and steps listed below.

What’s the all the rage with golden milk, and why should everyone be drinking it?

Turmeric, commonly named the “spice of life” in India, contains an extremely powerful anti-inflammatory proponent, curcumin. It has over 150 therapeutic uses, including the aiding in healing many different types of disease and sickness. Its number one use is to suppress inflammatory response.

Separate research among people diagnosed with metabolic syndrome also set out to determine curcumin’s effects on inflammation. Half of the participants took one gram of curcumin powder daily for eight weeks while the other half received a placebo pill.

At the end of the study, the curcumin group had lower levels of three blood markers of inflammation, including C-reactive protein (CRP), along with lower fasting blood sugar and hemoglobin A1c (a measure of longer term blood sugar levels).

For comparison, the placebo group had higher blood sugar levels and increased inflammation after the eight weeks. When the researchers evaluated eight previous studies, they, too, confirmed that curcumin lead to reductions in CRP levels. Read more

Coconut oil and full fat coconut milk (in the can or small carton) both contain lauric acid.

About 50 percent of the fat in coconut oil is lauric acid, which is rarely found in nature. Your body converts lauric acid into monolaurin, a monoglyceride that can actually destroy lipid-coated viruses such as HIV and herpes, influenza, measles, gram-negative bacteria, and protozoa such as Giardia lamblia.

Lauric acid is a type of medium-chain fatty acid (MCFAs), which is easily digested and readily crosses cell membranes. MCFAs are immediately converted by your liver into energy rather than being stored as fat. There are numerous studies showing that MCFAs promote weight loss, including one study that showed rats fed MCFAs reduced body fat and improved insulin sensitivity and glucose tolerance.

Yet another study found that overweight men who ate a diet rich in MCFAs lost more fat tissue, presumably due to increased energy expenditure and fat oxidation from the MCFA intake. In addition, coconut milk is rich in antioxidants and nutrients, including vitamins C, E, and B vitamins, magnesium, potassium, phosphorus, and iron. Read more

Just remember, as with any powerful supplement, use with caution. I don’t recommend consuming turmeric on an empty stomach, as it could cause stomach upset. Start with a little, and gradually increase over time. This is another reason I like to make it the way I do now – that way I can control how much turmeric I add to each individual serving. You’ll also notice the black pepper. Studies show that black pepper increases the bioavailibility of curcumin by 2000%(1), and should be taken at the same time as turmeric/curcumin to increase absorption and effectiveness.

**GOLDEN MILK is also an excellent health drink for those who may be immune compromised or who can only handle a liquid diet. This can be added to their regimen to increase healing (as long as the ingredients are safe for them).

I have to share my tiny pot that I got from Rouses! I use this little thing almost daily. You can also find this exact one here on Amazon. 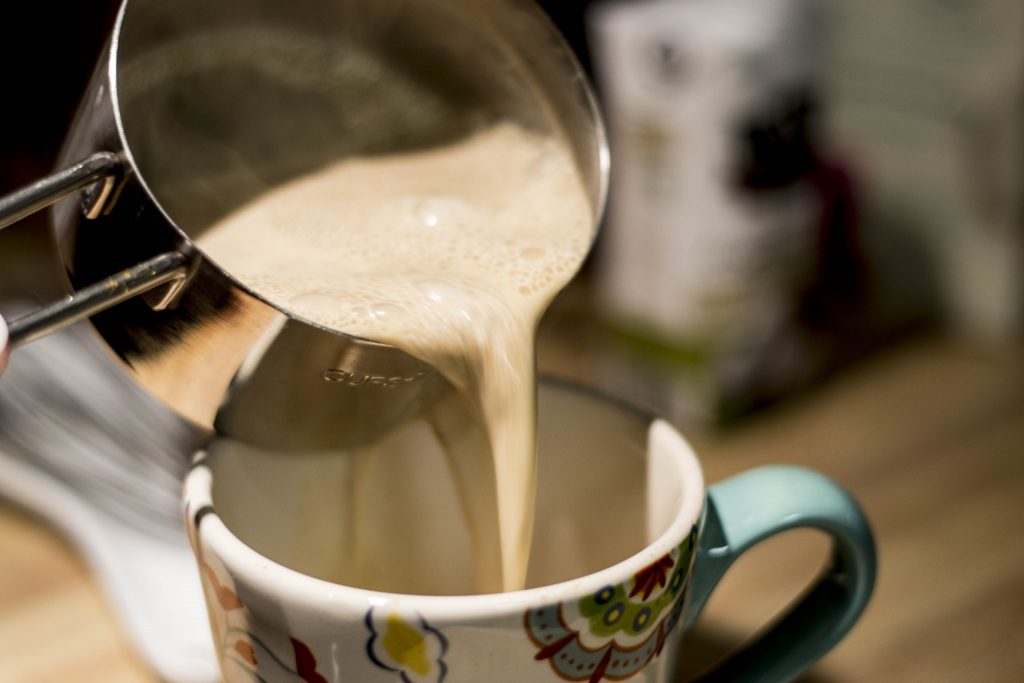 We haven’t used a microwave in our home since 2015, and we don’t plan on bringing it back. Once I found out how harmful it could be, we tossed it. It’s just too easy to heat things up in our toaster oven, and it only takes a few minutes longer. For years we’ve been compromising our healthy food in the microwave by exposing radiation and killing most of the nutrients. There are tons of evidence on the subject, including various science project videos out there showing plants dying from microwaved water vs. regular water.

Therefore, I say No to the microwaved golden milk. 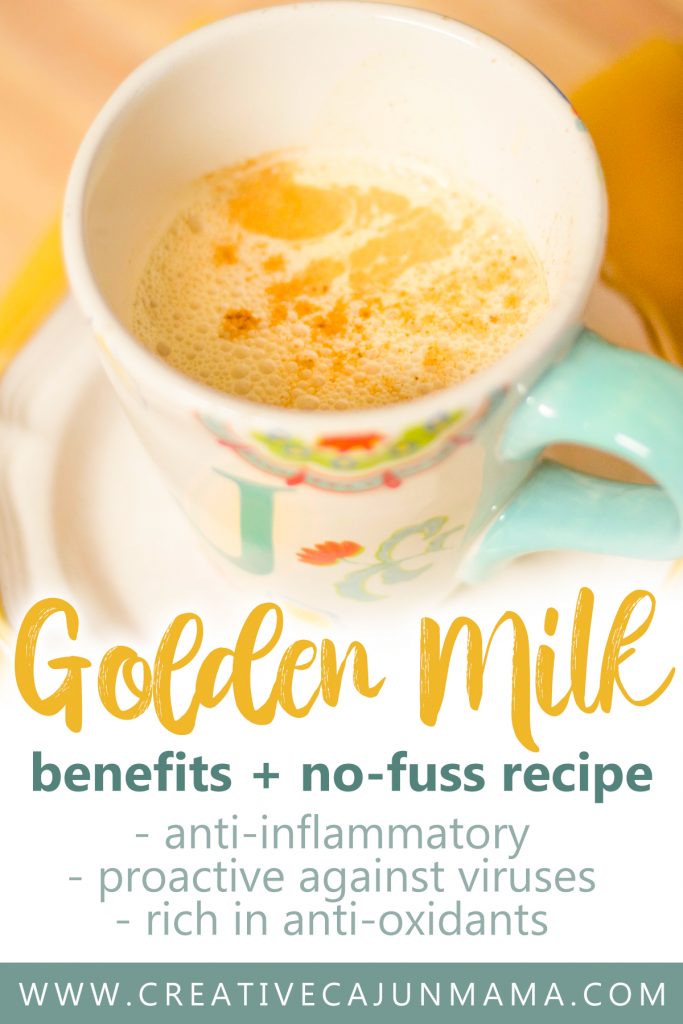 Then, add the turmeric, black pepper, cinnamon, and honey to taste (or agave, pure maple syrup, or molasses) as a sweetener. I highly recommend a higher quality cinnamon, as I didn’t know the different until I tried it. Wow. 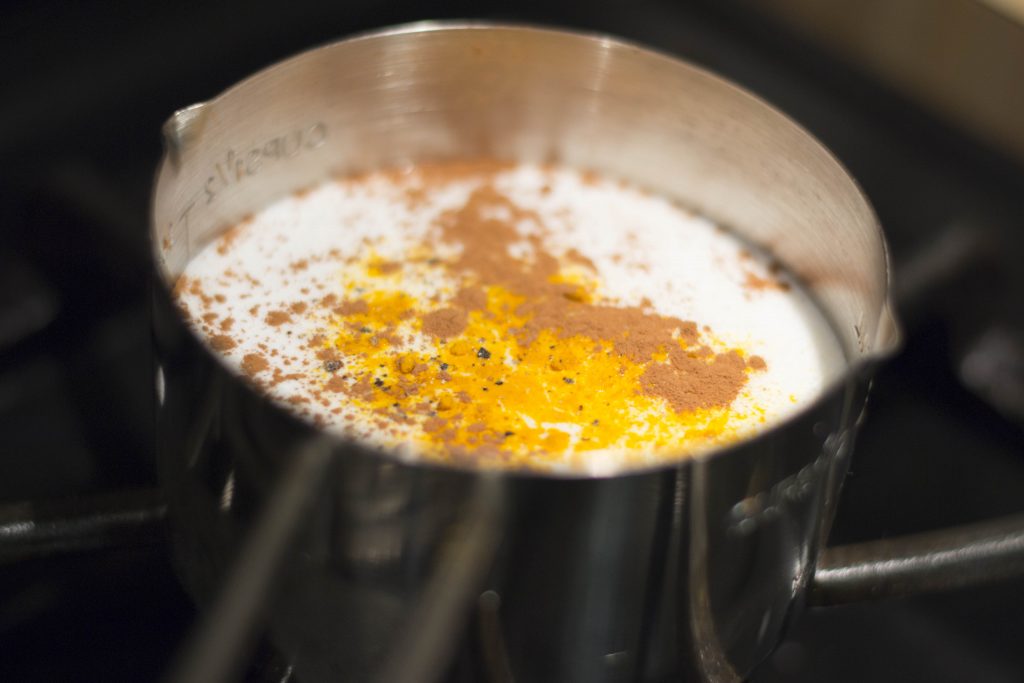 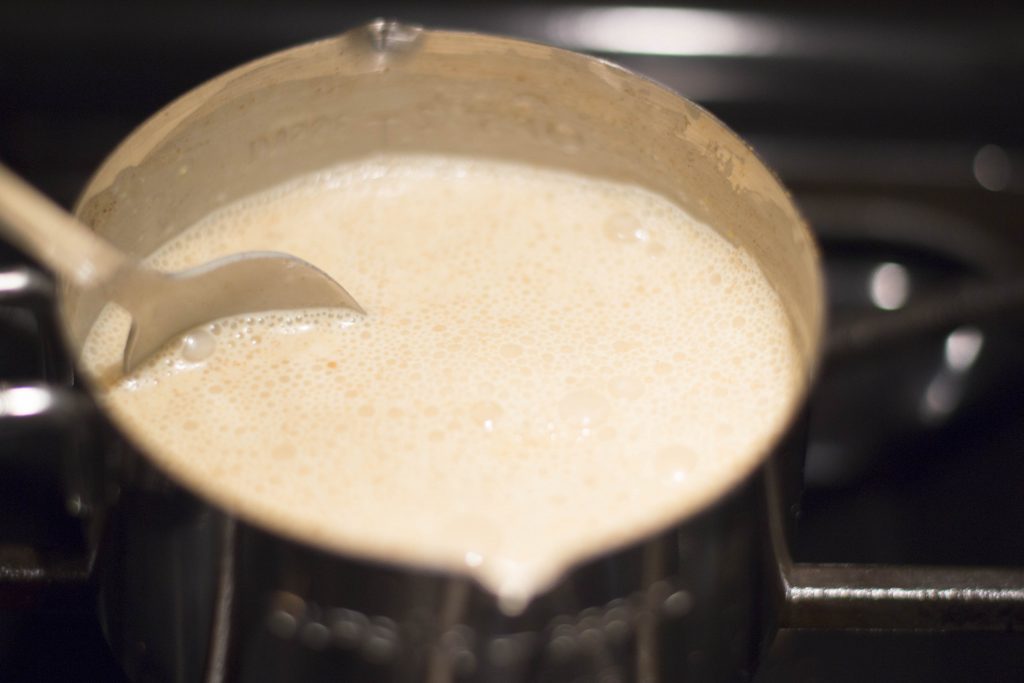 Stir until blended, and serve!

NOTE: You may also add ground ginger to taste, or even make a chocolate version using cocoa. Once warmed, add about 2-3 tsp of pure cocoa powder and mix until blended. Top with more spices if wanted – cinnamon, pumpkin spice, nutmeg. I highly recommend

Remember, do not boil! Heating until steaming and hot to touch is great. 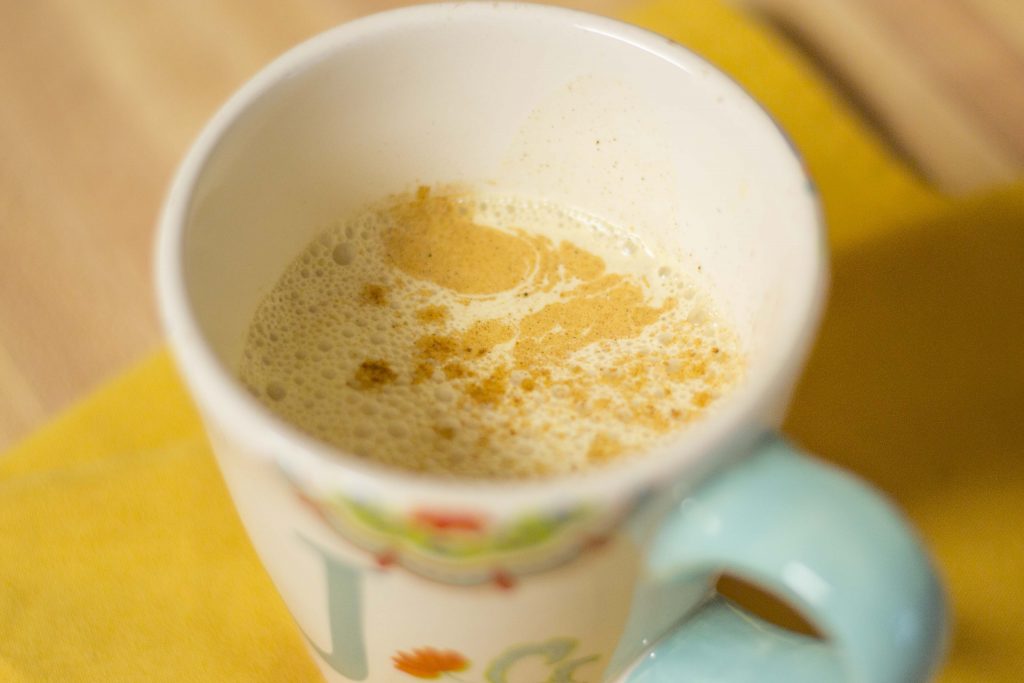